Do you really want to delete this credit card?
Once deleted the details will no longer be available.
Cancel
Are you sure you want to close the checkout process?
Please complete the payment to place your order successfully.
Exit Checkout

And the winner is: Häfele Australia

Tim Lelliott, National Business Development Manager at Häfele Australia, accepted the award on behalf of the company from Kesseböhmer Managing Director Burkhard Schreiber and the Area Sales Manager responsible for Australia, Heinz Isfort, in the Häfele Headquarters in Melbourne.

The Kesseböhmer award is a "challenge cup" and was awarded for the very first time this year. A jury consisting of the Kesseböhmer management team and the company's marketing and sales experts, along with the creative minds of Hamburg-based advertising agency no.nonsense, will present the award once a year. The aim of this initiative is to reward particular commitment and successful concepts for the international promotion of the "Clever Storage" idea as well as outstanding marketing achievements of Kesseböhmer partners worldwide.

"Clever Storage" itself is a seal of approval for Kesseböhmer's cabinet furnishings and is a clear indication of the value added customers can expect in terms of practical use, optimal storage space, the best possible overview and total convenience.

Häfele uses a whole range of tools in the process: extensive presence at trade fairs, the publicising of "Clever Storage" in journals and magazines, the design of a "Clever Storage" website and the lettering on an exhibition bus that carries "Clever Storage" long distance, ensuring customer proximity.

The interiors of the Häfele Design Centres in all major cities in the country, the exceptional customer advisory service, training and the use of advertising material all have a clear goal: to support kitchen manufacturers and kitchen studios in successfully selling top-quality kitchens with the extensive implementation of the "Clever Storage" seal of approval. A sustainable marketing strategy because campaigns are not just checked for their effectiveness but also specifically promoted and continuously developed with new ideas. Here too, Häfele Australia has proved itself to be a particularly constructive partner.

According to Burkhard Schreiber, the presentation of the "Clever Storage Award 2014" is both a thank you to the Häfele team and an incentive to continue filling the successful "Clever Storage" strategy with life in the future. 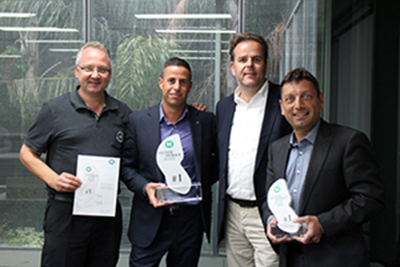 Articles could not be added to the favourites.

Install this webapp on your iPhone, tap and click on "Add to homescreen"